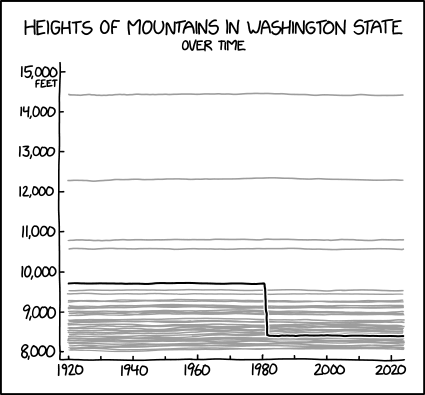 It's a good mountain but it really peaked in the 80s.

ironically, the founder tried to scrub his own online history
Read the whole story

Obfuscation as a Privacy Tool by Bruce Schneier
Wednesday November 6th, 2019 at 11:00 AM

This essay discusses the futility of opting out of surveillance, and suggests data obfuscation as an alternative.

We can apply obfuscation in our own lives by using practices and technologies that make use of it, including:

I am generally skeptical about obfuscation tools. I think of this basically as a signal-to-noise problem, and that adding random noise doesn't do much to obfuscate the signal. But against broad systems of financially motivated corporate surveillance, it might be enough.

This summer has been a difficult one for me personally. In the past month, both my mother and my father passed away. I will miss them immensely, and will be remembering their lives among family and friends, but here, on these pages, I'd like to honor them with a collection of images showcasing the place on Earth they loved and called home: Washington. When I was young, we lived on the east side of the state, on a big farm outside Spokane. We spent countless hours driving the highways and backroads connecting the farms to the towns and the city. Our family split up, and over time, some of us moved west to Bellingham, Longview, and Seattle. These were the green lands I dreamed of as a boy, and we spent years exploring the mountains, shorelines, rainforests, and cities up and down the coast. These are for you Mom, and for you Dad.

Let’s start at the end of this story. This weekend, I read Special Counsel Robert Mueller’s report twice, and realized that enough was enough — I needed to do something. I’ve worked on every Republican presidential transition team for the past 10 years and recently served as counsel to the Republican-led House Financial Services Committee. My permanent job is as a law professor at the George Mason University Antonin Scalia Law School, which is not political, but where my colleagues have held many prime spots in Republican administrations.

If you think calling for the impeachment of a sitting Republican president would constitute career suicide for someone like me, you may end up being right. But I did exactly that this weekend, tweeting that it’s time to begin impeachment proceedings.

Democrats tend to overthink things, to succumb to indecision. They’re looking two steps ahead, concerned that they shouldn’t impeach Trump because they won’t get enough (or any) Republicans in the Senate to go for it, or because they worry it will only serve to fire up Trump’s base heading into 2020. Fuck that. If the president has committed impeachable offenses it is Congress’s duty to impeach. It’s that simple.

Here’s a good thread on Twitter from Tom Nichols, a “never Trump” conservative who until now — I think correctly — has opposed beginning impeachment proceedings:

But there’s an argument, internal to us, that Trump should be impeached as a lesson in civics, as a reminder that trashing the rule of law and discarding your oath is not cost-free. That’s a political question. Until now, I’ve said it’s probably a bad idea for the Dems.

But political expediency is a bad idea too. At some point, not impeaching means that nothing matters in our constitutional life, and that nothing ever will matter. Impeachment, if it follows a careful rollout and debate, can negate that legacy.

And maybe, years from now, what we need is an asterisk in the history books that says: “There was a penalty for violating the oath of office, and engaging in these high crimes. And President Trump survived due only to the corruption of a single party.”

That last point is key, and succinctly expresses why I think Democrats should impeach Trump even if they expect to lose in the Senate. If Democrats impeach, make their case solemnly and truthfully, and Trump survives in the Senate, then it’s all on one party, the Republicans. If they do not impeach, history will judge that Trump remained in office due to the cowardice and corruption of Congress as a whole, Democrats and Republicans alike.

For that reason alone, Democrats should impeach. But I don’t buy the argument that any attempt at impeachment would prove futile due to Republican intransigence in the Senate. Republicans in the Senate will stick with Trump only until they don’t. J. W. Verret is not a senator but he is a career Republican and until now, was opposed to impeaching Trump. Political support erodes similarly to how Hemingway described going bankrupt: “Two ways. Gradually, then suddenly.” One or two Republican senators with the courage to step up is all it might take to get started. (Mitt Romney, the nation is looking in your direction.)

Lawrence Tribe — constitutional law professor at Harvard and the man who literally wrote the book on impeachment — writing in USA Today, on the Mueller report as a roadmap for impeachment:

The report is unequivocal in concluding that even if Trump is criminally innocent of obstruction, it is not for lack of trying. The main reason the investigation wasn’t completely thwarted was not that the president didn’t “endeavor” to thwart it — the definition of criminal obstruction — but rather that Trump’s subordinates refused to comply.

Consider, for comparison, that a president who ordered the military to destroy his political enemies would undeniably have committed impeachable offenses, even if the military failed to obey the directive. Add to this Trump’s decision to respond to the report by taking a victory lap rather than protecting our election systems from ongoing attack, and the likelihood that he continues to be compromised by leverage (financial or otherwise) from adversaries, and one sees a president indifferent to the security of the nation he is sworn to lead and to the Constitution he is sworn to uphold. Allowing such a president to remain immune not only from indictment but also from removal would betray Congress’ own responsibility to the public it represents.

Zealots, fools, and well-meaning idealists who don’t understand how the U.S. political system really works cry “impeachment” against every president. There were cries for it against Obama (despite the fact that his administration was the most scandal-free of any in modern history), against both Bushes, and Reagan. And of course Bill Clinton was impeached, over charges that, whatever you think of their merit, were indisputably less significant than what the Mueller report revealed about Trump.

In short, “impeachment” is oft used lightly on the political fringes. In the wake of the Mueller report, it’s starting to be used by sober-minded people who fully understand the gravity of its place in our Constitution — a measure of last resort. Alexander Hamilton described impeachment power as an “awful discretion”. Trump himself is now tweeting about impeachment, betraying, unsurprisingly, that he has absolutely no idea how the process actually works. The fact that he’s tweeting about it shows that he’s worried, and only serves to move it further into the political mainstream.

Ignore the noise and listen closely — the drumbeat is growing.

Taking the shame out of the Cone of Shame by Chrysanthe Tenentes
Wednesday April 10th, 2019 at 4:44 PM 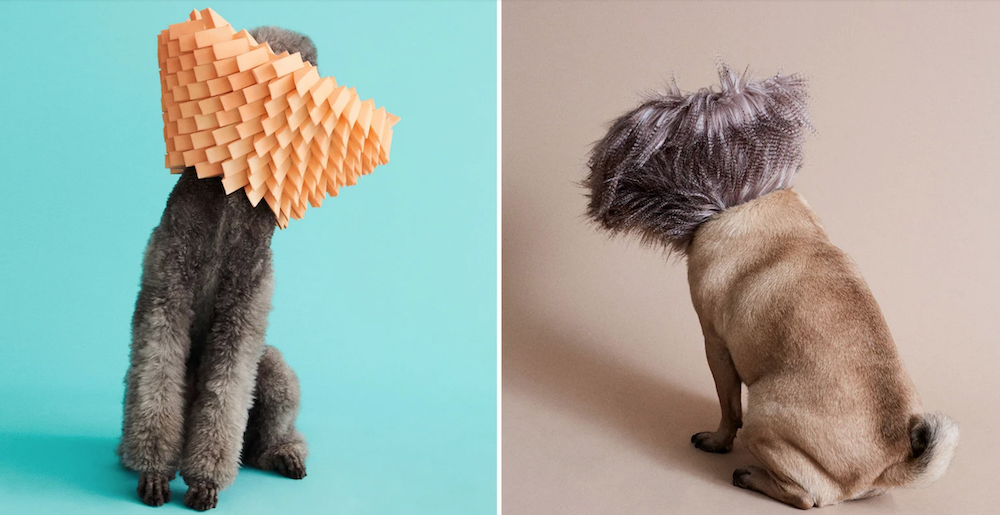 Photographer Winnie Au spoke with Buzzfeed about her ongoing Cone of Shame project, which looks to dispel the shame of the cones dogs must wear after medical procedures. Partially inspired by her late corgi Tartine, whose medical treatment would have cost tens of thousands of dollars without insurance, Winnie is using the project to fundraise for Animal Haven Shelter in New York. She’s an advocate for adopting pets.

A lot of people I know have bought their dogs verses adopting because they wanted a very specific breed, what most don’t realize there are rescues dedicated to specific breeds. So if you are obsessed with bernedoodles, you can adopt one. Of course, I love mutts too, and you can rescue an adorable mutt also. The most important thing to me is that your dog and its age, energy, and vibe fit your lifestyle. 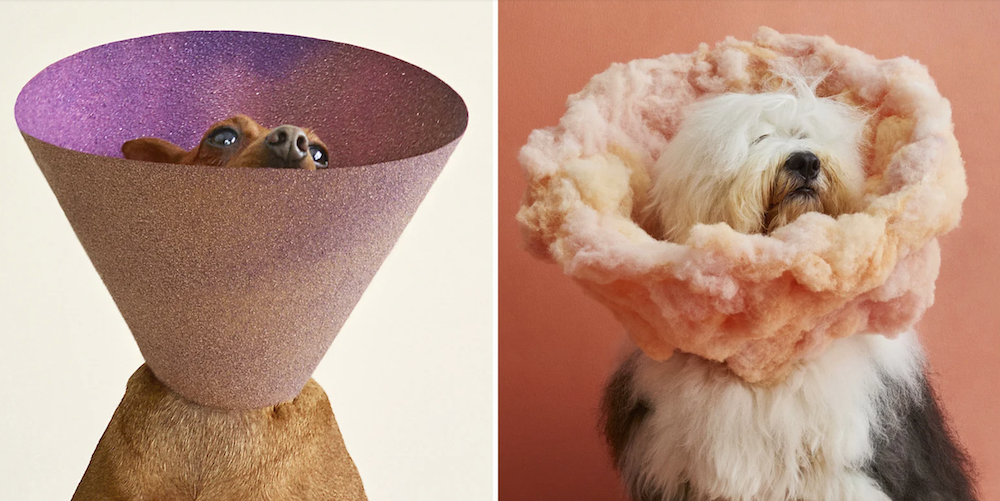 Winnie collaborated with costume designer and stylist Marie-Yan Morvan, whose work helped the project coalesce. I can’t wait to see more of this project. If you want to support the work and Animal Haven, you can buy a print or a tote via the Cone of Shame shop. 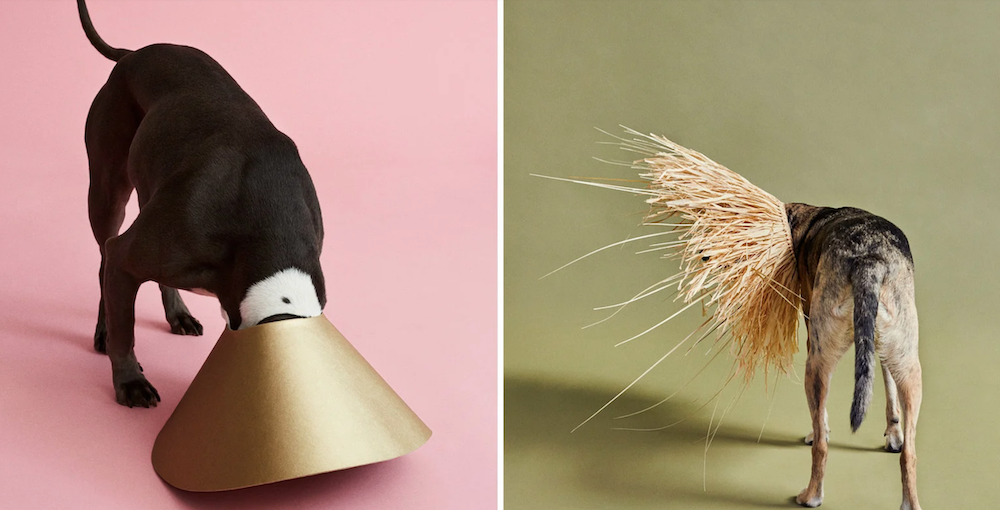 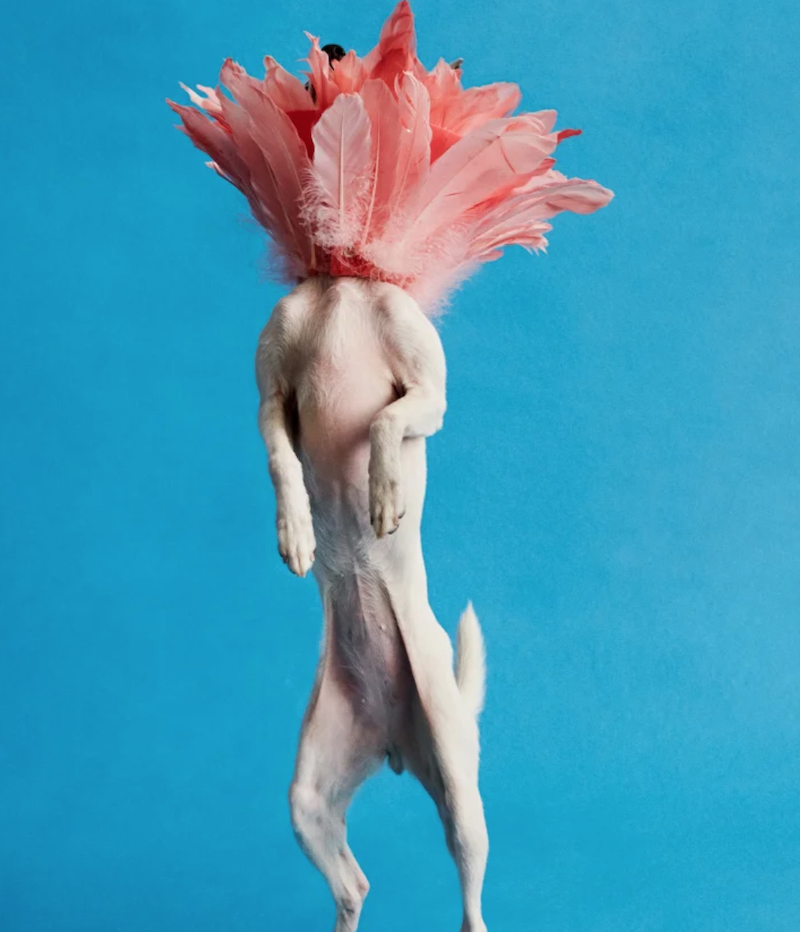